Cornell has recognized eight faculty members for excellence in their teaching of undergraduate students and contributions to undergraduate education.

The Stephen H. Weiss Awards were announced Nov. 2 by President Martha E. Pollack at a meeting of the Cornell University Board of Trustees, following unanimous recommendation by a selection committee that considered 14 distinguished nominees in all. The committee includes three current Weiss fellows, two emeritus faculty members and three undergraduate students.

The Stephen H. Weiss Presidential Fellows are: George Boyer, professor of economics and international and comparative labor in the ILR School; Dexter Kozen, Ph.D. ’77, the Joseph Newton Pew Jr. Professor in Engineering; Poppy McLeod, professor and chair of communication in the College of Agriculture and Life Sciences; and Kelly Zamudio, the Goldwin Smith Professor of Ecology and Evolutionary Biology in the College of Arts and Sciences.

Boyer joined Cornell in 1982 and has been a full professor since 1998. His students routinely laud him for his passion for teaching, call him the best professor they have had at Cornell and say he sparked their interest in history.

For two decades he taught a required course in economic history, a subject often considered dry and unpopular among students, and “made the course come to life,” the committee’s recommendation stated. “Instead of being dreaded, it was considered a jewel of the freshman year at ILR.” When the requirement was dropped, he created a popular, highly rated elective.

“Boyer has ensured that ILR’s teaching mission has not been just maintained, but has grown to make ILR a teaching jewel at Cornell,” the recommendation stated.

In his role as ILR’s director of teaching since 2002, he “creates a culture where faculty have an infrastructure to help support each other,” and he has actively supported teaching assistants’ development and performance.

His research includes 19th-century trade unions and British labor markets, poverty, and the evolution of social policy in Great Britain and the U.S.

Kozen has taught at Cornell since 1985. Widely regarded by his colleagues and students as a gifted and dedicated teacher, he is, according to one colleague, “the yardstick that the rest of us measure ourselves against when it comes to undergraduate education.”

He has taught five different undergraduate courses since 2011, the majority having class enrollments of at least 50 students. He has received consistently outstanding course evaluations. Highly laudatory student comments about Kozen’s courses speak to his teaching abilities and his commitment to student learning.

“I’ve watched him electrify a lecture hall with hundreds of undergraduates, and seen those same students bring their newfound passion and wonder to office hours and [laboratory] section,” a former student and teaching assistant said.

Kozen also has earned international recognition and awards for his theoretical computer science research, including work on algorithms, computer security, the complexity of decision problems in logic and algebra, and programming language logics and semantics.

McLeod joined the Cornell faculty in 2005. Her teaching focuses on group communication and decision-making, social influence, intergroup communication and research methods. Students have lauded her commitment to student learning, and faculty have said she inspires her students to learn and her colleagues to improve their own teaching.

“Rather than taking a more typical approach for class, Poppy wrote creative and original short stories, featuring interesting characters … interacting and influencing one another in complex ways,” one colleague said of McLeod’s large course Persuasion & Social Influence. “These stories provided an unusually rich canvas for students to apply course theories and make ‘real world’ connections that are essential for mastering concepts, and are simply entertaining besides.”

The committee also noted that her engagement with student organizations and residential experiences contribute positively to the academic environment and the overall undergraduate experience.

Her teaching awards include a Merrill Presidential Scholars mentorship award in 2016; a SUNY Chancellor’s Award for Teaching Excellence in 2009; and an Innovative Teacher Award for Creativity in Undergraduate Teaching in 2008. 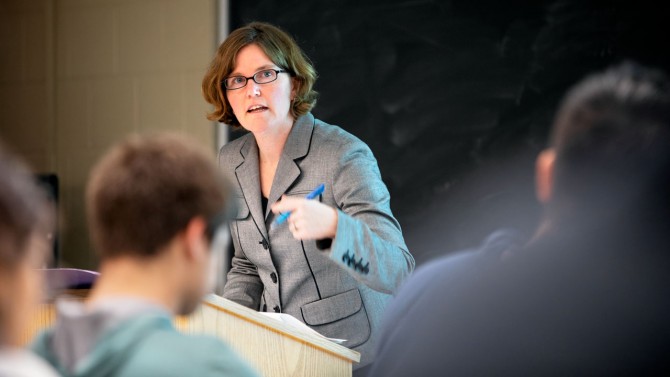 Kati Griffith, associate professor of labor and employment law, speaks during a class in Ives Hall.

Zamudio is “a first-rate researcher and scholar in a tough and competitive STEM field, and one of the best teachers at Cornell,” the committee stated. Students note that she maintains high expectations of them that are also realistic, coupled with mentoring tailored to support them.

A member of the faculty since 1999, Zamudio was named Goldwin Smith Professor in 2013. Her Cornell career has been marked by pedagogical innovation through a fundamental redesign of introductory courses in her field using active learning strategies. As a current Menschel Distinguished Teaching Fellow, Zamudio is studying the effects of activity modules on classroom learning and is piloting active learning and engagement in online platforms.

She also has shown unwavering commitment to underrepresented groups in STEM fields, including women, LGBTQ, minorities and first-generation students, and she has published related research on the effects of active learning enhancing diversity in the sciences.

Her “scholarship feeds into her interaction with undergraduate students at all levels,” said one colleague, who also noted “her drive to increase inclusivity and, through educational opportunity, to help those that are disadvantaged in society.”

Kati Griffith in the ILR School and David Smith in the College of Arts and Sciences have been named Weiss Junior Fellows.

Griffith, associate professor of labor and employment law and chair of the Department of Labor Relations, Law, and History, is an associate member of the Cornell Law faculty. Her scholarship focuses primarily on the intersection of immigration and workplace law.

She joined Cornell in 2007, has twice been selected by Merrill scholars as the Cornell faculty member who most influenced them and has twice been chosen by ILR students for the annual Macintyre Award for Exemplary Teaching. She helped establish and then directed the Worker Institute at Cornell’s Research Fellows Program, which provides research and outreach experiences for undergrads on projects statewide.

She teaches ILR’s required introductory course in labor and employment law almost every semester to 50 to 65 students – notorious as one of the most challenging courses in the curriculum, yet one of the most popular.

“Griffith is not just an excellent undergrad teacher. She is a powerhouse, a bundle of energy working tirelessly to improve the quality of an undergrad education in ILR,” the committee stated.

Smith is an associate professor of psychology and leads the Laboratory of Neurobiology of Learning and Memory. He came to Cornell in 2006 and has focused on developing courses (such as Navigation, Memory and Context: What Does the Hippocampus Do?) that excite and transform students’ thinking, while encouraging them to do research in his lab and publish their findings.

His student evaluations testify to the transformative nature of his teaching, and many former students have written that he has changed their career paths toward neuropsychology.

“Both of these nominees have taught at Cornell for many years, and done so brilliantly,” said Stephen H. Weiss Prize Committee Chair Marie Caudill, associate professor of nutritional sciences and genomics.

Former chair of the Cornell Board of Trustees Stephen H. Weiss ’57 established the Weiss fellowships in 1993 to honor Cornell faculty members for inspiring, distinguished teaching and mentoring of undergraduates.