"His pen unified the literature, opened up new directions and invariably redefined the state of the art."

A prolific researcher, Mitra was duly acknowledged as a leading economic theorist of his generation. His definitive and pioneering contributions to the efficiency and equity of inter-temporal allocation of resources gave a shape and cast to capital theory and to economic dynamics that will surely stand the test of time. Committed to the highest standards of scholarship, of precision and rigour, and blessed with rare analytical power, his touch enriched many subjects: chaotic dynamics, renewable and exhaustible resources, their sustainability and extinction, choice of technique in development planning, forestry economics, and undoubtedly others. He investigated convex and non-convex environments, with or without discounting, and whereas he did not neglect continuous-time dynamics, the setting of discrete-time was his favourite and formidable forte. Acutely sensitive to the role of prices on allocation and decentralization, he showed no hesitance in working on challenging problems that he regarded as fundamental, irrespective of their current professional popularity. A craftsman of the highest degree, a mathematical economist’s economist, his striking and decisive examples had as much an impact on serious economic scholarship as did his theorems and his proofs. To repeat, his pen unified the literature, opened up new directions and invariably redefined the state of the art.

In all of his pursuits, Tapan Mitra displayed an uncommon level of grace, kindness, and sincerity, with a never-failing emphasis on the positive. His sixtieth birthday was celebrated in a conference at Cornell, the proceedings of which were published in the International Journal of Economic Theory in 2010. His loss is a loss not only to his students and his co-authors, the line between the two not always clear in this case, but surely also to substantive and advanced economic theory. The authors of this obituary mourn, undoubtedly with many others, the passing of a friend and an example. As one poet said of another,

Thou in our wonder and astonishment

Hast built thy self a live-long monument

Highlights from the Economic Theory Workshop In Honor of Tapan Mitra

Though I did not know him personally, I was keenly aware of Tapan Mitra as a shining star. That I now sit in an office he occupied is not lost on me; I am somewhat overwhelmed by the gravity of living up to the example he set and his immense accomplishments.

Tapan Mitra’s contributions to Cornell and to the Economics profession extend well beyond his published works. His service to the department and his influence on students will have a large impact for many years to come. Tapan was chair of the Economics department twice, from 1993-1998 and again from 1999-2002. He also served as the Director of Graduate studies for the Field of Economics from 2005-2010. This is an extraordinary service record, especially given the large volume of important research he published over this time period. Tapan’s ability to succeed in academic leadership, scholarship, and mentorship – at the same time – is an enduring example to all higher education faculty.

Tapan was respected as a leader not for his force of personality but for being thoughtful, genuine, and honest. These are traits he brought to his interactions with all students, faculty, and staff, which is why he remains such a beloved colleague and teacher. During his time as chair, Tapan was instrumental in recruiting many of the most prominent economists in the department to Cornell. He was a true institution-builder and was one of the main architects of the current Cornell economics community. His imprint is still highly present in the shape and character of the economics department.

Tapan was a committed and beloved teacher and advisor. For many years he taught one of the most difficult courses in the department - core graduate microeconomic theory. Despite the difficulty of teaching such technical material in a required course, Tapan was celebrated by the students for his clarity and commitment to high-quality instruction. He was similarly popular with undergraduates. Tapan’s graduate students rank among the most prominent economists to have received their PhDs from Cornell. At Tapan’s recent 70th birthday celebration, many of his former advisees returned to Ithaca and spoke about the profound impact he had on their lives and careers. Although many had left Cornell many years ago and are established and celebrated researchers in their own right, each one could still vividly describe how he had been formative in developing how they think about economic problems and economic research. The clarity and precision Tapan brought to economic research, combined with his genuine care for the intellectual development of his students, allowed him to shape generations of successful economists.

Tapan’s commitment to research and teaching was underscored towards the end of his career by his generous establishment of the Tapan Mitra prizes for graduate and undergraduate research. In his own words, Tapan established these prizes as a “concrete expression of my continuing attachment to this great institution of learning.” Tapan will continue to influence the intellectual development of Cornell students with these prizes, which is a fitting legacy for someone who gave so much to the economics community at Cornell.

"Tapan was one of the world's finest mathematical economists. What many do not know and I discovered during my several years of research collaboration with him was his mind of total clarity. In his ability to see through a problem, he was unmatched. This enabled him to do economics from scratch, in a way that even school kids would follow, and take them all the way to plumb the intricacies of our economic world--be it the aggregation of welfare of future generations, the analysis of chaos or the management of forestry--fields that received Tapan's magic touch. Tapan was one of the kindest human beings I have known. He will be dearly missed by all students and colleagues."

"He was a prolific researcher who over the years acquired a fascinating range.  There is not much point in trying to single out a specific group of papers, when there are so many definitive ones. He was attracted to problems that had been known to be intriguing. His rare analytical power enabled him to make substantive contributions to resolving issues that had challenged some of the greatest economic theorists of all times like Paul Samuelson, Robert Solow and Leonid Hurwicz. He collaborated with Daniel McFadden and David Cass, who are among the outstanding theorists of the twentieth century." 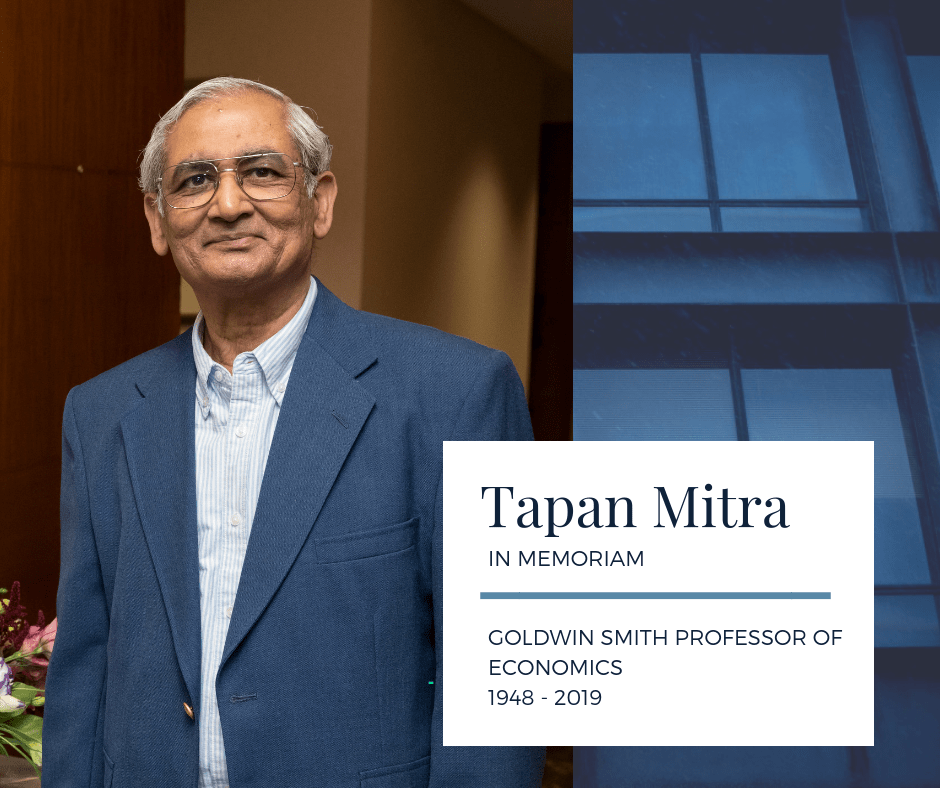