In a warming environment, visible climate change meets the “invisible hand” of economics, according to economist Kaushik Basu.

“You can feel it. Two years ago … I visited Beijing and Delhi back-to-back,” said Basu, Cornell’s C. Marks Professor of International Studies and professor of economics, in the College of Arts & Sciences. “You look up at the sky in both places and you realize that this is a problem that has been left for far too long – and now you have to work in a hurry. … You don’t have to read about it anymore. You need to look up and you are aware that something needs to be done.”

Speaking at the Perspectives on the Climate Change Challenge seminar March 6, Basu lectured on “Inequality, Poverty and Climate.”

At one time the “hard” sciences of the environment and the social science of economics were separated, but now they are linked, Basu said, although “economists have arrived at this topic – climate change, environmental economics and what we should do in terms of policy – rather late.”

Basu explained that basics like food and water are usually very cheap. But with global warming and a changing environment, even basic goods can become scarce and force rising prices. In an economic sense, the poor can be pushed out.

“As the climate situation gets worse, the poor will be affected in a very big way,” he said. “But in choosing policy you have to be careful. When it comes to economic policy, when you try to make corrections, there are some steps that are friendly to the poor and those steps which are not.”

The World Bank – where Basu served as senior vice president and chief economist from 2012 to 2016 – tracks poverty to understand how the poor are distributed internationally. The threshold of poverty is the equivalent of $1.90 per day. That is, anybody consuming less than that per day is counted as poor. This translates into about 900 million people, Basu said. That is, roughly one-seventh of the world’s population lives below the poverty line.

“What a partitioned world we live in,” he said. “Most of us don’t know a single person who lives below that line. As climate deteriorates, the poor get hit hard. Given that the world has such a large mass of people who are poor, you have to be sensitive to [environmental and economic policies].”

Why were economists late to climate change issues? Basu referenced Adam Smith, who in 1776 wrote “An Inquiry Into the Nature and Causes of the Wealth of Nations,” a seminal book that describes the concept of the “invisible hand” – how market forces work.

The invisible hand of economics allows individually selfish actions to nevertheless reach an equilibrium, which is good for society as a whole. For example, the town baker bakes bread, and the butcher offers animal protein; they’re centered on themselves yet fulfill a societal need. Basu said Smith was acutely aware that for society to prosper “altruism plays a role, benevolence plays a role, and trust and integrity play a role,” but they have been given short shrift in mainstream economics.

If the world’s climate changes dramatically, societal equilibrium and the economics of market forces fall apart.

“[Destroying the] environment is a … case where the invisible hand goes berserk. It backfires,” said Basu. “Because if you just think of your self interest – in matters of climate and the environment … your actions may have negative implications for others and be bad for society as a whole.”

Perspectives on the Climate Change Challenge seminars are held each Monday afternoon through May 8 and are presented by the Department of Biological and Environmental Engineering in the College of Agriculture and Life Sciences, the Cornell Institute for Climate Smart Solutions and the Atkinson Center for a Sustainable Future. 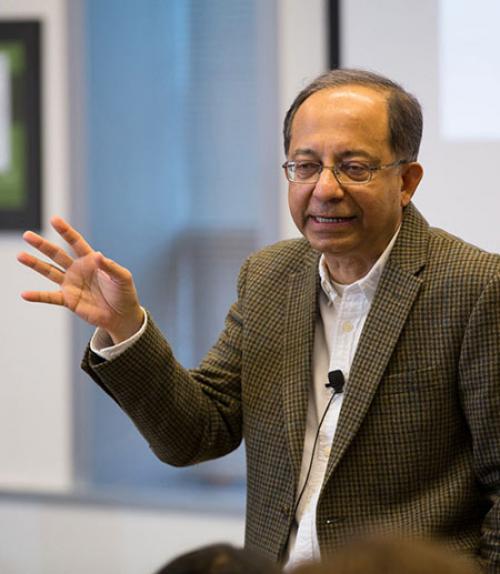