As a pre-eminent research institution and New York’s land-grant university, Cornell is uniquely suited to tackle “grand challenges” like the ones discussed at the Nov. 8-9 Global Grand Challenges Symposium, according to Wendy Wolford, Cornell vice provost for international affairs.

President Martha E. Pollack, who kicked off the event, concurred.

“As a university, Cornell is both distinguished and distinctive,” she said. “We have a reputation and a presence that is global, with some of the best faculty and resources of any university anywhere.”

Today’s challenges “require a commitment to engagement, a drive to continue reaching out in a time when connecting across difference is more critical … than just about anything else,” Pollack said.

Wolford organized the symposium, at which panelists from across campus, plus keynote speakers from the Andrew W. Mellon Foundation and the University of Notre Dame, laid out some of the most pressing issues of our times, as well as possible paths to solutions.

One of the goals of the symposium was to identify themes to be considered for Cornell’s Global Grand Challenge 2019-20, a yearlong dedication to a topic through new curricular, scholarly and engaged work across campus. The Office of the Vice Provost for International Affairs will announce the selected grand challenge early next year.

Wolford, who is also the Robert A. and Ruth E. Polson Professor of Global Development in the College of Agriculture and Life Sciences (CALS) and interim director of the Mario Einaudi Center for International Studies, moderated the opening plenary. She invoked the words of Nigerian novelist Chimamanda Ngozi Adichie in her remarks: “[T]here is no single story. There is no single challenge that stands above all others, and there is no single solution. Indeed, one person’s solution can be another person’s problem.”

Wolford encouraged diverse thinking and participation: “By definition, we have to work together to build a just, sustainable and connected world, where differences are valued, where inequality is mitigated and exchange is encouraged.

The keynote was delivered by Mariët Westermann, executive vice president for programs and research at the Mellon Foundation. Her talk, “International Education in an Age of New Nationalisms,” was a history lesson, a report on the state of democracy and higher education, and a call to action.

“If the specter of World War III no longer motivates international education as it did in the 20th century,” she said, “today we have violent threats and economic inequality as drivers of mass migration and enmity to take the place of that specter. International education can be a bulwark against these kinds of threats today.”

Rachel Dunifon, interim dean of the College of Human Ecology, identified “the war on facts” – or the notion that facts don’t matter or perhaps may not even exist – as a challenge to be tackled. She suggested three steps that universities can take in the defense of facts: greater engagement in policymaking; improved communication of research; and giving researchers “time, funds and knowledge to collaborate with policymakers and practitioners.”

Daniel Fitzgerald, director of the Center for Global Health and professor of medicine at Weill Cornell Medicine, sees education as the grandest of challenges. “[W]e need to increase access to education for all children, all the way through adolescence, so that they can all develop to their full potential as adults,” he said.

Lorin Warnick, Ph.D. ’94, the Austin O. Hooey Dean of the College of Veterinary Medicine, closed the opening plenary by identifying “planetary health” – including issues of disease transmission, mass extinction, sustainable food production – as a major challenge facing humanity. Cornell and the education of its students, he said, can be a big part of the solution.

Keynote speaker Raymond Offenheiser, director and Keogh School Distinguished Professor of the Practice at the Notre Dame Initiative for Global Development, University of Notre Dame, and former president of Oxfam America, said a grand challenge should “assume a 20-year timeline.” He outlined five areas that he said were fundamental to human existence: taming technology – including artificial intelligence and robotics – for the workforce; mitigating climate change; managing the migration of people brought about by climate change and political, economic and other upheavals; feeding 9 billion people by 2050; and values: “To embrace agency, voice, equity and inclusion,” Offenheiser said.

Eduardo Peñalver ’94, the Allan R. Tessler Dean and professor of law at Cornell Law School, said migration is an issue where law will play a major role, and solutions will require international agreements. “Law is really the matrix that weaves everything together,” he said.

Kathryn J. Boor ’80, the Ronald P. Lynch Dean and professor of food science in CALS, responded to the need to feed the world. The challenge will be to provide an “adequate, safe and nutritious food supply to meet the needs of a growing global population and to do so without a parallel and commensurate increase in inputs to grow that food, and also to do so without degrading our environmental conditions,” she said.

Plenary 3: ‘The View From the Regions’

Keynote speaker Kaushik Basu, the Carl Marks Professor of International Studies and professor of economics in the College of Arts and Sciences, said technological advances are creating challenges, such as global inequality and the erosion of global democracy, on par with those posed by the Industrial Revolution. “We are probably at a juncture of that kind,” he said.

These challenges stem from labor-linking technology that allows workers to be employed by companies in other countries. While this technology has resulted in higher wages, workers now receive a smaller overall share of profits.

On the other hand, technology offers an opportunity for developing countries with digital connectivity and the rule of law. The economies of Rwanda, Ethiopia and Bangladesh are growing at 7 to 8 percent per year, he noted.

Challenges such as global inequality will require the type of unconventional policies and thinking that emerged during the Industrial Revolution, such as Britain’s income tax, introduced in 1842. “That was thought of as an unbelievably interventionist action,” he said. “We have to do radical thinking of that kind today.”

With one-seventh of the world – nearly 1 billion people – living below the poverty line, Cornell must offer not only top-tier research ideas but also a moral commitment to lessen global inequality, he said. “You’re serving a common human interest,” he said.

Other panelists – directors of Cornell’s regional studies programs – discussed the lessons gleaned from across the globe on issues such as income inequality, the diminishment of democratic institutions, language extinction and climate change.

As in the previous sessions, the final plenary featured calls for bold action.

Parfait Eloundou-Enyegue, chair of development sociology, has observed a “global involution,” in that inequality has metastasized around the world. He suggests “reducing inequality in our backyard” as a first step.

Sarah Kreps, associate professor of government, discussed global challenges to peace and conflict. “The role of the U.S. is managing threats,” she said. Challenges such as the rise of China as a world power and militarization of the South China Sea could be stabilized by integrating China into a U.S.-led order with multilateral institutions.

Sustainability, itself, is a grand challenge, said David Lodge, the Francis J. DiSalvo Director of the Atkinson Center for a Sustainable Future. “Research, the main product that universities have to offer in the sustainability arena, is often – at best – going to contribute a small part of a solution. We need to speak more boldly and more loudly and more publicly about what we know,” he said.

Mor Naaman, associate professor of information science at the Jacobs Technion-Cornell Institute at Cornell Tech, said protecting democracy is our most urgent challenge.

Wolford ended the symposium with remarks that punctuated a day and a half of ideas. “Why do we care about the many challenges facing the world today?” she asked. “We heard two types of answers: We care because we can; we care because we should.” 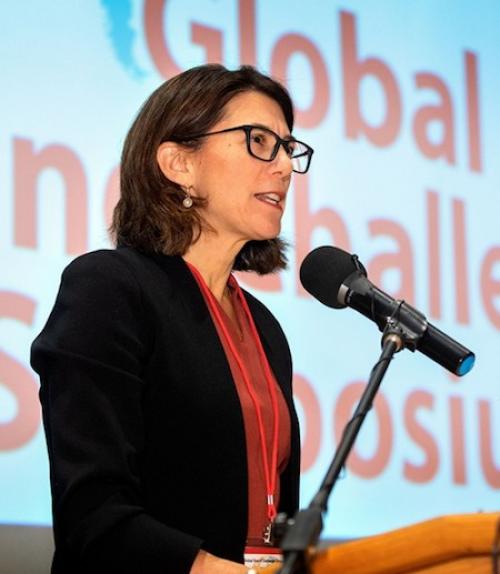