Annie Rogers ’23 didn’t think she had interest in: learning another programming language; discovering how the brain works; or becoming an entrepreneur.

But after spending eight weeks this summer living and studying in New York City as a student in the Milstein Program in Technology & Humanity, “it’s opened up a whole new world of possibilities.”

Rogers is one of 20 students who took part in the summer program at Cornell Tech, the first summer that Milstein students were able to study in person in the city. The Milstein program combines a liberal arts education in Cornell’s College of Arts and Sciences with cutting-edge coursework at Cornell Tech. The summer program includes mentored workshops, guest seminars, group projects, “civic innovation” challenges and real-world engagements in New York City.

“I was moved by the conversations we had about whether computers can be creative, what it means to be creative and whether we can build intelligent machines,” said Rogers, an information science major whose final project was an interactive circuit sculpture of the brain, showing which areas light up when a person studies the humanities, when they explore science and technology, or when various disciplines intersect. 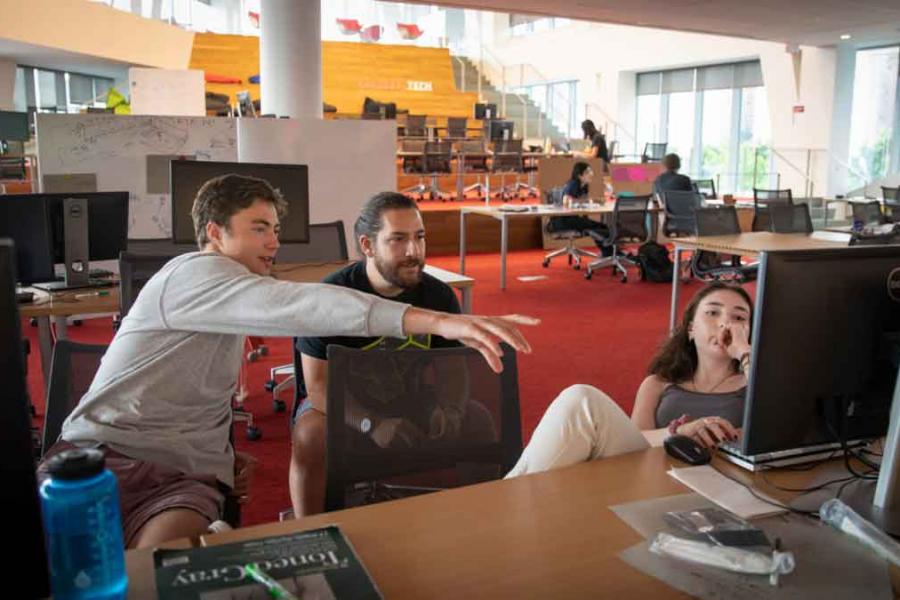 Bil Leon, center, instructor for digital making at Cornell Tech, works with students on their final projects in the Tata Innovation Center

“Conversations around technology and humanity are the future of the world, in my opinion,” Rogers said. “At the end of the day, everything comes down to being human, and if we can’t understand that through the lens of technology, we won’t be successful.”

Kushagra Jain ’23, an information science and economics major, said the structure of the summer gave students free time to delve deeply into topics or technologies of interest. “Our entire class learned the basics of Blender (a 3D design program),” he said, “then beyond that, whoever wanted to learn more, they had office hours for us where we were able to take that basic knowledge and take it further.”

“Monumentality” was the theme for the summer, which began with the students exploring a Roosevelt Island statue featuring Franklin D. Roosevelt’s 1941 Four Freedoms speech, and continued with discussions and projects focused on conceptions of monumentality and freedom in civic spaces.

“It very much changed the way we would look at things throughout the summer,” said Elizabeth Ominsky ’23. “Everyone has a different idea of what freedom looks like.”

For the civic innovation challenge, designed by Romero, students partnered with Heat Seek, an organization with a product to help tenants determine whether landlords have been cutting off their heat. Students helped the organization design their product, create educational materials for users and find funding for their work.

“We were doing hands-on work, meeting with clients and understanding their needs,” said Ominsky, an art history and information science major. “It felt very meaningful and impactful.”

The Friday excursions – including trips to the Metropolitan Museum of Art, the Museum of Modern Art, the New York Public Library and Michael Milstein’s tech startup, Grand Central Tech – were a highlight for Jain.

“We also toured Governor’s Island and walked through downtown Manhattan’s historic buildings and streets with Cornell urban planner Bob Balder (the executive director of the College of Architecture, Art and Planning in New York City),” he said. “That was incredible.”

Aviva Muñoz ’23, an economics major, said another benefit of the summer was getting to know her fellow Milstein students better – because of COVID-19, many of them haven’t spent much time together in person. The classes and discussions confirmed why she chose to apply to the program.

“My personal interest is the business side of technology. I understand the hard skills I need to know and I’m applying those to other things I’m learning in school – such as how people make decisions,” she said. “It’s nice knowing that I don’t have to be stuck in a box of only being a coder or a programmer. I can also branch out and find my own interests in the tech realm.”

The Milstein sophomores will return to campus this fall and embark on original Junior Projects, kickstarted by their summer experience at Cornell Tech.

“This was an unprecedented experience, as the first Cornell undergraduates got to experience the astounding resources, talent and vision at Tech,” said Austin Bunn, associate professor of performing and media arts, and director of the Milstein Program in Ithaca. “I called them ‘astronauts.’ I’m just so impressed at what they achieved and excited to see how this summer transforms their thinking, their ambitions and sense of what is possible.”

The Milstein Program was created in 2017 with a $20 million gift from Howard P. Milstein ’73, Abby Milstein and Michael Milstein ’11.

Read this story in the Cornell Chronicle.

Cornell launches $5B campaign ‘to do the greatest good’